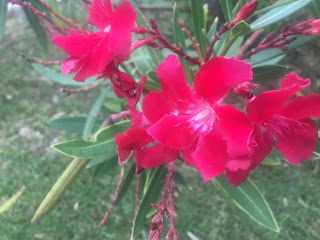 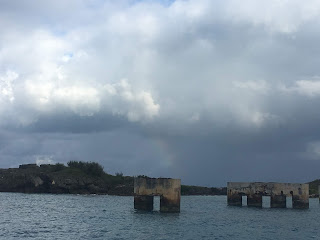 Weather dictates... and we worked with our BIOS crew to come up with a plan that would work for everyone based on the 20+ mph north wind. Heading out 8 miles to the majestic North Rock was out of the question based on the wind and building seas, trying to keep in mind that we could definitely find a closer, more protected spot for some snorkeling and swimming. We spoke with the captain and decided to head over to Bailey's Bay, which also had some really cool views and fish. While anchoring, we saw a smaller sea turtle not far from the boat and then the students geared up and headed in. After snorkeling for a bit, some of the group headed back to the boat to relax as a couple others stayed with our guide and captured a small yellow jack and crab to take back to BIOS for a scientist researching DNA on the Bermuda fishes. A relatively quiet ride back and it was almost lunch time, so we all headed to wash up and put our belongings away. The weather began to break while we were eating l
Post a Comment
Read more 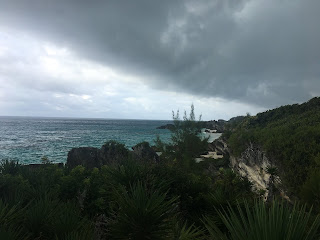 Rain, rain go away.... we woke up to some light showers with a few peeks of sun through the dawn clouds. Just as we headed in for breakfast, a quick deluge came through making us all head indoors to eat (which is far from the norm). French toast, sausage, eggs, and fresh fruit can always get the day off to a much better start. Immediately following breakfast, we joined Kyla and our craft driver Kenny for a scenic ride out to Warwick Long Bay. Once we arrived, it appeared the showers may stay just to the south so we disembarked and headed to Jobson's Cove. The first thing we noticed was the three horses being slowly ridden on the beach. Looking down we saw remarkable pink sand and then Kyla shared the reasons why the sand is pink and we took some samples for closer viewing. The Kiskadees were flying through the coves as we slowly navigated the dense sand. Right when we began to head up towards the trail, a few families of roosters and hens with their little chicks came to greet
Post a Comment
Read more 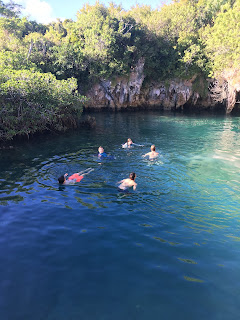 Another Bermudiful day.... following a good night's sleep, we readied for breakfast and discussed the activities for the day. First off was to Walsingham Park, where we got to hike, learn about how the caves are such a part of Bermuda's natural environment. The flora and fauna of the park is different that other spots on the Island, such as the natural all-spice plant. Our hike first took us to Blue Hole, where we were able to jump off the two cliffs into the water... of note (every single student jumped in) the first time that has happened on a trip. All of the students encouraged each other and even jumped off multiple times. As we headed from spot to spot, we saw so many incredible sights and even were able to go into a couple of caves. In our last cave, we got to swim! The water was so clear and it was incredible to swim in the cave while learning about how the stalagmites and stalactites are created and continue to grow. After a great lunch of hamburgers, hot dogs, and
Post a Comment
Read more 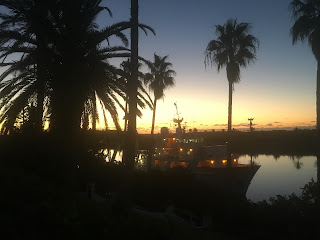 Quite the morning coffee spot... can't think of many better. Another Bermudiful morning! After a great night sleep for all, we headed to a fantastic breakfast of pancakes, eggs, homefries, fresh fruit, and more. Immediately following breakfast, we then headed to Cooper's Island (a former NASA station, now a Bermuda Natural Reserve) to hike, remove some invasive species, and plant an endemic tree. We ripped out several Brazilian Pepper trees, Casuarinas, and other vines then digging a hole for our Olivewood that came directly from a Nonsuch Island nursery. After all that hard work, we headed down to one of the pristine beaches and set up a transverse of 28' to pick up washed ashore plastics and other trash. As we were all sweaty and hot, we had to hit the ocean for a relaxing swim and some snorkeling just to make sure we were adequately cooled off. We were lucky enough to see a few "baitballs" of fry and jacks forcing them to jump out of the water. A schoo
Post a Comment
Read more
More posts